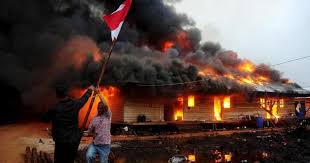 Research on security and justice among religious minorities in Indonesia

The Indonesian constitution provides freedom of religion for 6 officially recognized religions. East Asia has traditionally had a high level of tolerance towards diverse religious practices, but religious intolerance seems to have been growing in recent years, indicated among other things by violence and discrimination towards religious minorities. For example, the Setara Institute reported 197 violations against freedom of religion in the country in 2015, such as attacks on places of worship by radical Islamic groups. Even at a legislative level, the status of religious minorities has weakened, because of the Joint Regulation from 2008 and the Blasphemy law from 2010. Current President Jokowi has announced an intention to improve the situation of religious minorities, but on the ground this statement does not appear to have been followed up with practical outcomes.

In Indonesia, Seefar and partners have started a research project to gather evidence on incidents of persecution and violence towards religious minorities, feeding into strengthened mechanisms for monitoring and protection. Seefar has been working on the issue of religious minorities for years, as they are one of the marginalized groups in The Peduli Program. A particular focus of the project is to explore security and justice practices within religious minority communities, as well as in relation to disputes that occur between these communities and others. Seefar is responsible for research design and results analysis, which will include questions on social exclusion, security and protection and access to justice. We also provide advice on integrating technology within the incident monitoring system.